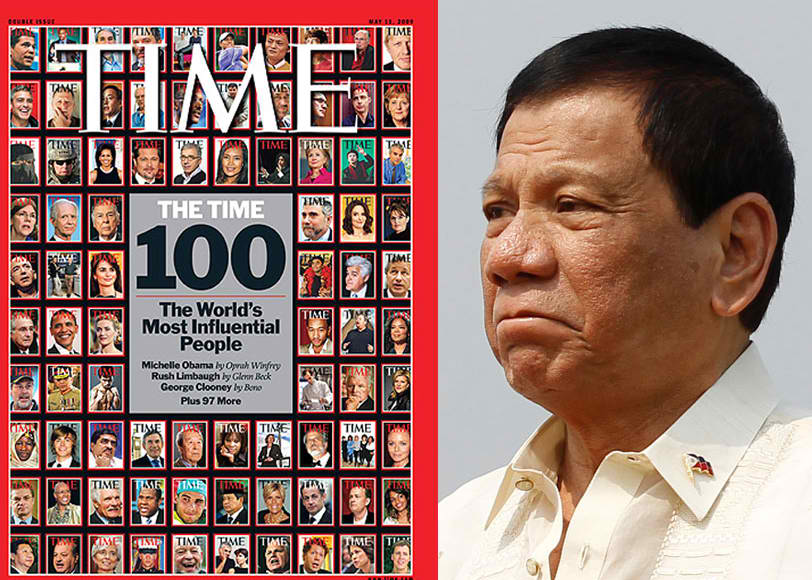 Duterte Places First In Time’s 100 Most Influential List: WHY?

Very simple. Filipinos voted for him. Not only the Filipinos based in the Philippines but likewise those living abroad, particularly the millions of Overseas Filipino Workers (OFWs) who sympathize with him. Those supporting Duterte really went out of their way just to visit the website of Time Magazine  to express their desire for their President to be the top in this year’s Time’s 100 list by clicking the “YES” button.  They could easily make a concerted effort! What the…ooops!!!

While there are some who disfavor or abhor the President even, it is considered that majority of Filipinos believe in the President’s advocacy to bring the real “CHANGE” that they long for. That’s precisely one of the reasons why Duterte won in the last elections. It was a protest vote against the previous administration. Despite criticisms on his war on drugs and foul-language, it is evident from any poll surveys that majority still support his plans and programs. Hey guys, it only means that the President’s supporters are  neither trolls nor robots as opposed to what the detractors are painting them. They are genuine “homo sapiens” coming from the A,B,C,D,E bracket of society. In short, these criticisms led him to a “stardom-like” status, making him known (famous and infamous) not only in his country but in the international arena as well.

Basically, Filipinos hate illegal drugs and criminality. They have so much of it. As such, they would want abrupt solutions for this kind of problem faced by some of their families, relatives and friends in the neighborhood. It was Duterte who made more than 700,000 drug addicts, pushers and drug lords get out of their holes, so to speak,  and surrender to the Government. Reality check, no President has ever made these people come out in the open. In fact, illegal drugs proliferated during the stint of previous administrations.  However, I don’t discount the fact that his war on drugs may have been abused by those in authorities as killings and collateral damages have been attached/related to it.

Nevertheless,  Duterte’s efforts to prioritize public interest landed him to Time’s 100 List (Top 1 at that!). To his supporters, he is a President who cares for the poor, the disadvantaged and the oppressed. Perhaps, you can call him a “populist” because he’s concerned about the plight of the big number of Filipinos who are still beset with problems on poverty and economic inequality. That’s where his popularity lies, the big influence which steered his passion to serve the country for their cause as pronounced by him in some of his speeches.

But hey, with or without the said recognition, Malacanang assured that the President “will remain true to his promise to serve the country and its people”.  I just hope he is true to his words and succeeds in the end!

Note: The author did not vote for any of the Presidentiables during the 2016 elections.  However, she is pro-Government and pro-private sector as well.