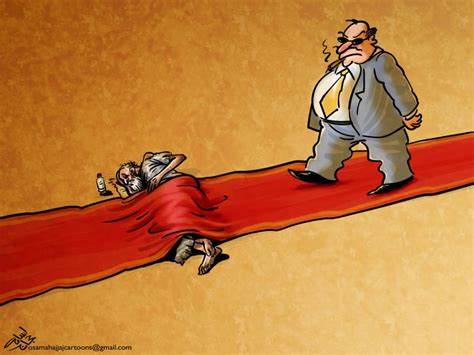 Rich Man, Poor Man: A Wake Up Call For Everyone!

The parable of the Rich Man and Lazarus is not new to us. We have been hearing this, at least once a year, based on the daily mass readings of the Liturgical calendar. In this parable, our Lord Jesus Christ effectively conveyed His message by vividly painting a dramatic situation of contrast between richness and poverty. As depicted, the rich man wore “purple garments and fine linen and dined sumptuously each day” while Lazarus, the poor man, was “lying at his door”, “covered with sores”, and who would gladly have eaten the “scraps that fell from the rich man’s table”. But as we continue reading the parable, the scene brought us to what happened to the both of them after-life. Seemingly, the situation was reversed, the rich man ended up and suffered in hell while Lazarus was happy in Heaven.

We can only surmise what exactly happened as the parable did not mention anything about it. Perhaps the rich man had simply ignored Lazarus or had failed to respond to his cries for help. He was probably so preoccupied with his material possessions, and so he had no time to show mercy and compassion to poor Lazarus. Maybe the rich man died without a chance to seek God’s forgiveness and show true remorse for his sins. Hence, the unfortunate situation.

In today’s world, this particular story is not “foreign” to us. It reminds us of what is happening in the world nowadays. Some of us can relate in one way or another to both characters, either that of Lazarus experience or what the rich man did to the latter. It’s like a wake-up call for all of us to be mindful of the needs of those around us, especially if we have so much to offer to those in dire need of our help.

Feeding the homeless and the hungry in developed and industrialized nations like the United States is much easier as the Government allocates budget for the purpose, and they have non-profit organizations which support for this cause. However, in less developed and developing countries such as the Philippines, the situation is different. There are hundreds of millions of people in the world who have probably experienced what Lazarus felt when no one dared to help. In the Philippines for instance, I am reminded of those people living in shanties and squatter areas in the country where some of them sourced their meals by gathering scraps of food from garbage cans or from recycled food leftovers (known as “pagpag” from restaurants) to feed their families. This scene is a direct contrast to what some households in neighborhood living a luxurious life where their pantry cabinets are filled with food and groceries, more than enough they need, but eventually leaving some of them unconsumed and ending up in trash bins. So, how can we all help to change the sad situation of the poor? How can the few very rich men or the 1% of the world’s population who hold half of the world’s wealth help reduce wealth inequality? How can we help the United Nations Sustainable Development Goals No.1, in the humblest way we can, to end or at least reduce poverty in all its forms everywhere? How can we help alleviate the suffering of the 10% (roughly 700 million) of the world’s population who are still living in extreme poverty today, struggling to make ends meet.

Regardless of our status in life, our Lord Jesus Christ wants us to be merciful and to be kind to others, so that all of us (rich or poor alike) will have the opportunity to be with God in Heaven. The said parable also reminds us to be sensitive to our neighbors who are not only materially and physically poor (e.g., sick, downtrodden, etc.) but the spiritually poor as well. And the reminder is not only geared towards the rich people but everyone who can afford to extend a helping hand. As such, it is possible for anyone, even the ultra-rich, to enter heaven if he or she is not indifferent and insensitive to the plight of the “poor”.

Mother Teresa who was canonized by Pope Francis as Saint Teresa of Kolkata is the best example of what Jesus wants from all of us, to care for the poor. While on earth, she devoted most of her life to selflessly care for the poor, the sick and the dying. St. Teresa, once indicated: “Let’s touch the dying, the poor, the lonely and the unwanted according to the graces we have received and let us not be ashamed or slow to do the humble work.” She further described those whom she served as “each one of them is Jesus in disguise.” Because of her great and extraordinary efforts on earth, no wonder she reaped great heavenly rewards as well!

There were other saints too who cared par excellence for the poor. Saint Francis of Assisi was one of them. One of the famous stories about him was his encounter with a leper by the side of the road. Because of his mission to devote his life to the poor, St. Francis embraced (literally and figuratively) and welcomed the leper into his life as a brother. St. Mother Teresa even commented about this: “The encounter with the leper made St. Francis”. Similarly, Saint Vincent de Paul whose feast day falls on the 27th of this month dedicated himself to serving the poor. He was renowned for his compassion and generosity, hence his title as “Great Apostle of Charity”. Incidentally, the aforesaid saints happened to be in the list of my favorite saints!

Pope Francis, in one his talks to the faithful and pilgrims mentioned that to “ignore the poor is to despise God” and that “the Lord’s mercy for us is tightly connected to our own mercy for others.” The Holy Father further indicated that Lazarus represents the “silent cry of the poor in every time and place, and the paradox of a world in which astonishing wealth coexists with scandalous poverty.” And if we don’t “open the door of our hearts to the poor, the door remains closed. Even for God.” And according to the Holy Father, “this is terrible.” Further, the Holy Father in one of his previous messages on the World Day of Migrants and Refugees stated that we must “stretch out our hands as Jesus does with us freely and lovingly offering help to the poor and all those in need”

In essence, the parable about the rich man and Lazarus is one of the Lord’s ways of telling us what He likes and wants us to do. He wants to wake us up from the slumber of apathy and for us to open our eyes to fully see those who are suffering. While we are equal in the eyes of God, we can’t also discount the reality however that here on earth, there is a substantial wealth gap between rich and poor people. Nevertheless, God doesn’t look at our financial capabilities, what matters is our relationship with Him. You see, we may have the best of friends, the right and powerful connections, the best of education, the best food on our table, the best designer clothes or the best of everything in this world, but if we don’t heed God’s call or if we are deaf to the cries of help of the poor just like the Rich Man, then we are nothing. Surely, it would require tons of courage to do what the great St. Teresa of Kolkata and the other saints did humanity. However, if we can spare a little of our time, talent and treasure to those around us in dire need of help, even if it’s just baby steps, perhaps God will remember us someday, somehow.

On this World Day of Migrants and Refugees which incidentally is celebrated today (25th of September), we pray to our Blessed Mother who herself is the image of love, mercy and compassion to intercede for us, for our personal intentions, and to guide us in our journey in opening our hearts to be more receptive to God’s love. We pray too that God may grant us eyes that see, ears that hear and hands outstretched to offer help so that we can truly be rich in His eyes. Amen.

Jesus, King of Mercy, we trust in You. Amen.