A Grain of Rice for the Poor! – Tips and Thoughts

Did you know that there are 925 million(almost a billion) undernourished throughout the globe, majority of whom are children in South Asia, particularly China and India? Yes folks, the said data was culled out from the UN’s World Food Program (WFP), a large humanitarian organization whose primary goal is to end world hunger.

But of all places worldwide, why China and India? Of course, one may be surprised how come there are still millions of hungry people in the said countries despite their progress in terms of building major national and agricultural infrastructure. We are likewise cognizant of the fact that these countries are the two powerhouses in information technology, being  manufacturers and developers of high-tech hardware and software. Most of all, China can afford to extend financial assistance and is one of the biggest creditors of the United States, a developed and industrialized nation! Yet, there are so many people suffering from hunger and malnutrition in the said country? Hard-core economists would be able to further elucidate on the subject but there is a simple and logical explanation to this. One could be their dense population and another is the wide disparity between their richest and poorest people, among other things (e.g. beliefs, policies and system of government, etc).

Some people would have thought that most of the suffering and impoverished kids would have come from the poorer countries in Africa, especially when recent harrowing images of dying African kids  are being shown on the worldwide web. 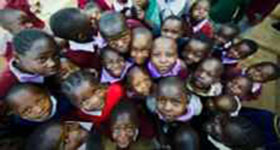 We can hardly see suffering Chinese children being shown on TV, and in other media and online networks, and even in WFP’s website! Why? This is truly mind-boggling!

According to WFP, there is enough food to feed these people but the access of quality food and the means to deliver the same to the undernourished kids’ table is the big problem. Sure, respective Governments of these affected kids are doing their jobs, seemingly however their effort is not sufficient or not a priority maybe.

So, how can each one of us help feed these people? The WFP has designed various ways on how to raise funds and acquire donations from the richer nations and other generous individual donors. But they have also other innovative ways whereby ordinary “unmoneyed” people, either in groups or individuals, can participate and donate grains of rice for the poor worldwide. This is neither a joke nor a scam! It comes from a reputable institution, so it could be real and legit!

My Useful Tips, being an advocate for a good and quality life for everyone, has been attracted to it and decided to join the said WFP’s program which is being managed by the FreeRice team. The scheme is not quite easy as there is a need to invest time and  talent (and treasure as well because there is a corresponding value for the time spent) in order to produce a grain of rice.  Otherwise, it would be a futile exercise on your part if you don’t have both and the willingness (even on your spare time) to do it!

For more than a month, “My Useful Tips” has already donated more than half a million grains of rice for the hungry in developing countries. 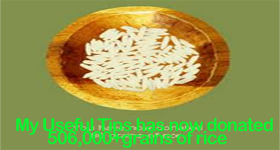 Said grains of rice can be gained by answering the questions provided in the website under a wide range of interests to select from such as Humanities, English (Grammar and Vocabulary), Mathematics/Algebra, Geography, Science (Anatomy), Chemistry, SAT (Entrance Exams), and other Language Learning (Spanish, French, Italian and German). For every correct answer, there is a corresponding 10 grains of rice which will be go to your coffers and eventually donated to the hungry in your name. But it is actually the sponsors and advertisers  who pay, in your stead, the corresponding amount for the rice gained/donated.

Half a million grains of rice is not bad at all. It may be  “small fry” to some people, but  to “My Useful Tips” it’s like catching a “big fish” although it is just starting and learning to walk, so to speak! It has learned to enjoy and love exploring the alleys and byways of freerice web place already, i.e., hopping from one category to  another!  Hopefully, it would be able to deliver thousands of sacks of rice to the poor when time comes. 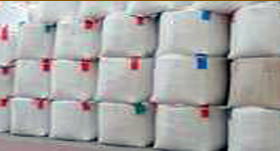 What is good in this  is that responding to the trivia questions does not only allow to share one’s time and donate something for the poor but it also stimulates the mind – a fun way of refreshing what one has learned in school, increasing one’s learning curve and improving his/her/their general knowledge on so many things under the sun! But if you have enough “dough” and don’t have the time, opt to share with them and donate your cash online instead.

Based on My Useful Tips experience,  helping solve the world’s greatest  problem is worth it! 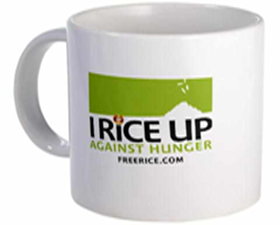 How about you guys? Why don’t you try, join us, “rice  up” and have some fun!

(Update:  As of todate, myusefultips has donated more than a million grains of rice!

One response to “A Grain of Rice for the Poor! – Tips and Thoughts”