Lance, a 7- year old cute smart kid is currently enrolled in a private school in the heart of Manhattan. He just came from Singapore as his Mom's work (an expat) requires him to transfer from one place to another. Just like normal kids, he loves to play any kind of games, from high tech stuffs to simple paper planes and rubber band games. Some high end games which I would say he's an expert at it would include those which are found in his iPad , Nintendo 3Ds, plus his collections of pokemon cards. Don't dare to pretend to know this card game and you'll surely be corrected. He knows the game by heart including the characters and their respective position titles and powers. Once in a while, he chanced to show his prowess to his older play mates in board games, such as chess and checkers. Of course, he wins most of the times, but there's a hidden secret behind it!

(Note:  Photos below are exclusively for use of  www.myusefultips.com, hence not for reproduction and consumption of  anyone) 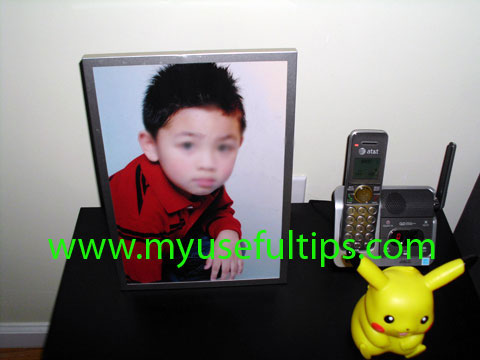 I had the chance to meet Lance through kins last week and I was amazed of the boy's smartness and talents. He is not only well versed in kids' games but also in his academic subjects. When asked about his performance in school, particularly in Math and Science subjects, he was confident to respond that he normally gets straight A's. In fact, he proudly told the audience around that he can do his assignment in Science within five minutes. Ask me  what was the assignment all about! It was a memorization of about 10 or more terminologies, such as water vapor, precipitation, hail, sleet, and the like. The assignment was for the kids to memorize the definition of the said terms and it involves not just 1 or 2 words but the full meaning of it. I was tempted to test his learning skills. After browsing the pages of his Science book and reading the definition of the words silently for about 5 minutes, he handed over  the book to me.  Acting like his teacher, I started asking him the definitions randomly, not using the sequence as written and arranged in the book. Surprisingly, he quoted the definitions most of the times verbatim, and others in his own words, but correctly defined. He's good in Language too, particularly in Spelling. 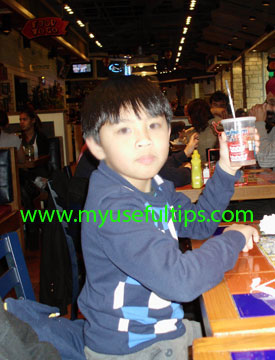 The said experience was astonishing, which I said to myself, wow! I have some encounters with kids in school who are in their Grades 3 to 5's, and it is frustrating to note that some, if not majority, of them couldn't spell out and pronounce the words correctly. They are very good in conversational English, no doubt about it, but when it comes to lessons in class, they hardly catch up. Surely, there are various factors behind it, but since this is not about them, let's leave it to the Language teachers and their parents to thresh it out.

Going back to Lance, there was one time he showed me a piece of paper with his writings on it. It was a short story and I thought it was a writing exercise in school. His Mom told me, it was his own composition to which he nodded. Apparently, he sometimes scribbles notes when he's alone. I asked Lance' permission if I could take a photo of it and publish the same in myusefultips.com blogsite. He looked at me with pure innocence and said, “Are you really going to publish it? as in everyone can see it?” When I said, yes, I could see happiness in his face, some excitement and he was really  looking forward to seeing it posted and so he could check it on his iPad. The short story was written in a  white bond paper with his own penmanship. Awesome!.

Absolutely, my  cam did not do justice to the story. I could have scanned it instead to have a better view, unfortunately the scanner just gave me headaches, so I have to plainly re-write it here for your sake. I would like to say my apologies to my dear Lance as this post came later as expected.

Shown below is the full unedited script of the story:

“The Revenge of the Lost Viking"

"Once upon a time a little boy discovered about a weird looking fossil. The little boy got it and bring it to the science center then the scientist told the boy it is about the lost viking. The scientist said the vikings have a war but one viking ran away so who claim that fossil the vikings will come to you and destroy your hometown said the scientist. The boy feel tricked and lied from the scientist so he took the fossil home then the vikings arrived to destroy his hometown. The boy realized that he make a mistake about the story of the lost viking. So he tried to ask the scientist what their weakness is. The scientist told the boy their weakness, it is killing them with your heart. The boy said, “how to do that”? The scientist said to the boy to apologize to people if you are mean to them. So the boy keep on apologizing to people quickly then the vikings are disappearing but one viking left. The boy realized something to apologize he must apologize to everyone causing this big trouble. He apologize everyone for this trouble. There is no more vikings. The boy saved the day for the trouble he made. The boy said his name is Richard. So Richard return the fossil to where it supposed to be. Richard's mother is proud so she tell the President to give him a reward.   The President give Richard a trophy. Richard is proud. His father was relaxed for Richard. Richard smile in tears. Richard and his family feel good about it. And everything is back to normal. And they live happily ever after. The End.”

Below is the photo of the story (clearer version), as written by Lance. 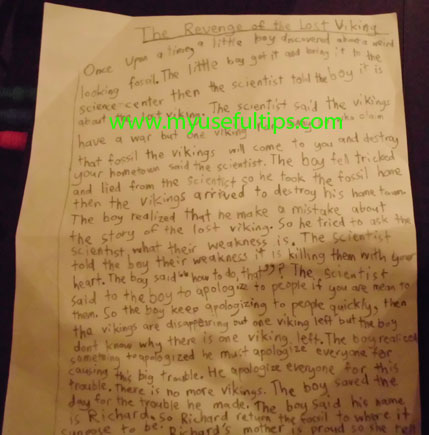 The lighter version but complete: 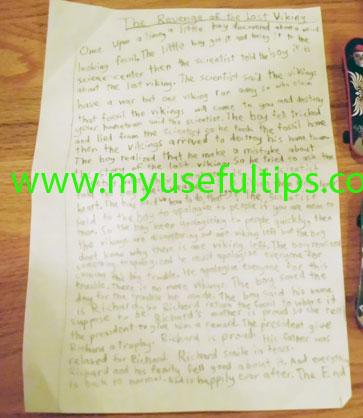 Bet you,  it's uncommon for  a 7-year old kid to be able to write like this. The smart thought that comes from an innocent and unpolluted young mind, particularly the moral lesson behind the said simple story is most essential.

I would have wanted him to explain the said story on video but I felt it was no longer necessary. The story alone proved how the young boy thinks and how profound the message it brings to young boys and girls.

I just hope Lance will grow to be a loving and kindhearted person and stays away from the lures and influences of evil doers. Very good job Lance! Keep it up!