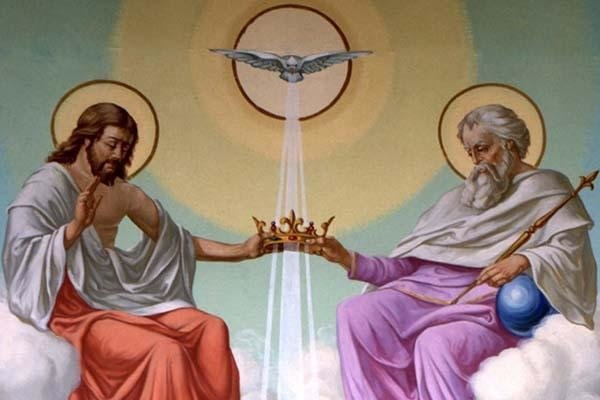 Musings On One God, Three Persons: Our Faith and the Mystery of the Blessed Trinity

With the little knowledge acquired from my mother and a catechist in school about the Holy Trinity (whose Solemnity by the way is celebrated today, 12th of June) that we believe in one God in three Divine Persons: the Father, the Son and the Holy Spirit, I had this habit however (unknowingly) of praying to each of the three persons during my childhood days, as if there were three separate and distinct Gods (or an alternative phrase: as if there were 3 Gods, separate and distinct from each other). It was only later did I know during my high school years that what I practiced was quite inaccurate. Have you experienced this kind of notion, same way as I did?

As explained by some theologians, while the 3 persons in the Holy Trinity are distinct and separate but yet fully God, we cannot deny from the fact based on Scriptures that there is only one God and He exists as 3 persons with the same nature, substance and being. The Father is God, the Son is God, the Holy Spirit is God, however, we do not regard them as three Gods, but only one God. There are some biblical quotes that can attest to this, one of which is: “There is no other God besides me, a righteous God and a Savior; there is none besides me. Turn to me and be saved, all the ends of the earth! For I am God, and there is no other”.

That is why when I became a catechist during my college days and which continued during my professional life, I was too careful in teaching the kids (4rth and 5th graders) about God, particularly about the Holy Trinity. The thought suddenly dawned on me that if the subject matter is difficult and complex to be explained to and understood by adults, how much more for graders and youngsters? The mystery behind the Holy Trinity is not similar, not the type of mystery shown on detective stories in pocket books and movies which can be solved by the leading actors and protagonists at the end of the day. Definitely, it isn’t like that! What I did was to present to the young kids a simple and brief account, with the end view of sending the message across, stressing on the mysterious aspect behind it but sans further explanation. The discussion placed more emphasis on the Catholic faith regarding the Trinity, that there are three persons in one God, meaning that God is Father, Son and Holy Spirit all at the same time (period)! The use of metaphors and analogies to illustrate and explain such complexities of the Trinity to these young people was intentionally staved off. I simply had to inculcate in their young minds about the importance of our faith in and love for God and made them understand about it, highlighting the importance of making the sign of the cross as a form of expressly professing our faith in the Holy Trinity. Indeed, it was a challenge explaining the Trinity to the kids due to the fact that it is a mystery and so I thought the lesson plan on the subject had to end as a mystery to avoid further confusion on their innocent minds!

The dogma of the Blessed Trinity is the most mysterious and incomprehensible among the many Church teachings. Believing in the Holy Trinity requires a leap of faith! As a matter of fact, believing and accepting our God, an invisible God who created heaven and earth, whom we have not seen nor heard nor hold, is much easier. Hence, without deep faith and trust in God, it would be hard for us to believe in the doctrine of the Blessed Trinity. As they say, the mystery of the Trinity can be experienced and felt even if we can not explain it. The Doctors and Fathers of the Church engaged in a thorough research on this matter but opted to illustrate the mystery of the Trinity by living it with deep faith in their respective lives. As such, we just have to have trust and confidence in our Catholic beliefs handed down to us from generation to generation without even asking questions and making arguments. Otherwise, we may end up like other sects which protested against the Catholic Church due to disagreements in certain Church teachings.

Undoubtedly, the Blessed Trinity is the most crucial and profound doctrine of our Catholic faith. It is one of the mysteries of our faith that is beyond human comprehension and there could be a reason for this. The Catechism of the Catholic Church (#234) states that “The mystery of the Most Holy Trinity is the central mystery of Christian faith and life. It is the mystery of God in himself. It is therefore the source of all the other mysteries of faith, the light that enlightens them. It is the most fundamental and essential teaching in the “hierarchy of the truths of faith”. Jesus Christ Himself revealed the truth about the Holy Trinity to us when He said: “Go teach all nations, baptizing them in the name of the Father and of the Son and of the Holy Spirit” (Matthew 28:19).

So, how does the Trinity practically relates to our daily life? Seemingly, God wants us to take into account the Holy Trinity as the center of our day to day relationship with Him. When we pray everyday and when we make the sign of the cross from start to finish, citing the name of the Father, the Son and the Holy Spirit, it is one form of commemorating the Trinity in our daily lives. Similarly, the very short prayer to glorify God, such as the Glory Be to the Father, and to the Son, and to the Holy Spirit honors in a way the Holy Trinity as well. Likewise, when we are baptized in the name of the Holy Trinity, we are formally welcomed and become God’s children and are formally registered as followers of Christ and members of the Church. The Trinity reminds us to be open and obedient to God’s commandments and that God is always there to welcome us back when we falter and fail. The Trinity reminds us of God’s love for us and for us to love God back and spread that love to our neighbors, especially those in need.

Pope Francis in one of his previous addresses stated that the Holy Trinity “makes us contemplate the mystery of a God who incessantly creates, redeems and sanctifies, always with love and for love, and to every creature that welcomes him, he gives the gift of reflecting a ray of his beauty, goodness and truth.” He mentioned that “everything, in Christian life, revolves around the mystery of the Trinity and is fulfilled in this infinite mystery”. Further, the Holy Father stressed the personal love and interest God has in each one of his children, saying the Lord is not ever far away, but is an attentive and loving Father to all, from the smallest to the greatest. Pope Francis stated that the Holy Trinity is not only an invitation to contemplate and praise Jesus Christ, but it is also an opportunity to celebrate “with ever-new wonder the God of love, who freely offers his life to us and asks us to spread it in the world.” In one of his previous tweets, the Holy Father stated that the mystery of the Blessed Trinity invites us to live in communion with one another, in love and in sharing: certain that wherever there is love, there is God.

May our dear Lord God, the Father , the Son and the Holy Spirit grant us more patience, kindness and love towards our neighbors and to comprehend the mystery behind His Holy Trinity. May the Blessed Mother help us live by faith, love God more and to walk with us towards the eternal goal of the Blessed Trinity, a beautiful mission, and a joyful reward in God’s heavenly kingdom for all of us. Amen.