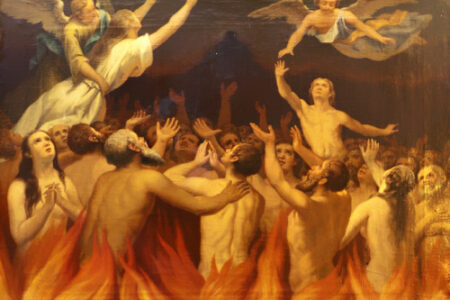 Musings on the Mystery and Relevance of Purgatory: Does that Ring a Bell with You?

Few years ago, when we were briefly discussing about the feast of All Souls Day, I accidentally unleashed a friend’s unusual belief or perception about praying for the souls of those who have gone ahead of us. (Note: The month of November is dedicated to the holy souls in Purgatory, hence the blog)

Apparently, my friend does not believe in offering prayers for the dead despite his being a devout Catholic and a pious man. Basically, he is of the view that once a person is dead, it is what it is. It is either the soul goes to heaven or hell, no second chances are given even if a person is able to seek forgiveness before dying. As such, there is no need to pray for them. He opined that prayers for the dead won’t help and are no longer necessary. In essence, he does not believe in Purgatory – a temporary state of being where cleansing and purification for souls destined for heaven happen. How about you? Does Purgatory ring a bell?

I was baffled and surprised to discover about my friend’s position on this matter. I had no tinge of idea that there could be pious people like him who do not believe in every teaching of the Church. And so, I inquisitively asked him the following: What does he normally do a) when he attends wakes or burials; or b) when he visits the grave of his parents particularly on All Souls Day, or when he remembers their birth and death anniversaries? Does he pray for their souls, for purification and forgiveness of their sins, and the like? He politely responded in a negative and mentioned that he silently prays for the bereaved family and for himself instead, and not for the faithful departed.

While I wanted to further discuss with him about Purgatory, its beauty and relevance in our Christian faith, on second thought I had to cut short the discourse as no amount of explanation would suffice as he sounded already cynical and avoided talking about it. Probably, he had read philosophical narrative about Purgatory and I just hope and pray that he will reconsider his position someday.

So, why do we commemorate our departed loved ones and friends? Why do we celebrate All Souls Day? Why do we Catholics pray for the souls in Purgatory while some people or other Christian denominations don’t? Some theologians expressed that while the word “Purgatory”, per se, may not have been specifically cited in the Scriptures, there are however indications and suggestions about it (however, this article will not delve into details of this). Even saints and holy people have encountered visions of the souls in Purgatory. For instance, a man who mysteriously sat beside St. Padre Pio while he was meditating in a room told him that he is still in Purgatory and requested him to hold a Holy Mass in his favor so as to be freed from Purgatory. In one of his books, The Way, St. Josemaria Escriva wrote: “I felt the company of the souls in purgatory very strongly. I felt them as if they were tugging me by the cassock, asking me to pray for them and to ask them for their intercession”. St.Josemaria made friends with the souls in purgatory and he became an advocator and preacher for them. Similarly, St. Nicolas of Tolentine, who was proclaimed as the patron saint of the holy souls in purgatory, had likewise experienced visions, including images of Purgatory. Praying for the souls in purgatory was St. Nicholas daily norm spirituality. Despite all these, other Christians still don’t acknowledge all these narrations based on their own set of beliefs. These differences only show that there are still some of us who find it hard to understand afterlife, especially Purgatory. But doesn’t it sound more logical and sensible to believe in Purgatory rather than not?

The Catechism of the Catholic Church confirms the existence of Purgatory and the purification of the departed souls, stating the following:

a) “When the Lord comes in glory, and all his angels with him, death will be no more and all things will be subject to him. But at the present time some of his disciples are pilgrims on earth. Others have died and are being purified, while still others are in glory, contemplating ‘in full light”, and
b) “All who die in God’s grace and friendship, but still imperfectly purified, are indeed assured of their eternal salvation; but after death they undergo purification, so as to achieve the holiness necessary to enter the joy of heaven”.

Praying for the dead specifically for the holy souls in Purgatory has been a tradition of Catholics from generation to generation. Praying for the dead should be an obligation on our part. In fact, it is not just an obligation but it is also one way of showing our spiritual love and support to the souls of our departed loved ones and friends and those forgotten who are most in need of our prayers. Mass offerings and almsgiving are some things we can do for the souls, with the end view of saving and releasing them from the long and painful sufferings in Purgatory. That is why the Church devotes the entire month of November to prayer for the Holy Souls in Purgatory for the said purpose.

The benefits of Purgatory are enormous and incredibly beautiful! Certainly, it is reassuring in the family when someone dies and everyone knows and confident that this person might go straight to heaven because of his or her goodness on earth. But there is no guarantee if that is so as there is no way of finding out. Only God knows. Definitely, everyone would love to be in Heaven and enjoy eternal happiness. Yes, we have to strive more to be holy to achieve this ultimate goal. If we can avoid Purgatory, that would be much great. However, the reality here on earth with its complexities and the worldly temptations, we don’t really know. As such, we have to pray for all of us here on earth, and more especially for the souls in purgatory because they cannot pray for themselves. According to the Scriptures, only those whose names are written in the so-called Book of Life, those who are only clean will be able to enter the Kingdom of Heaven. But God in his infinite love and mercy for us gives hope for us to be reconciled to Himself in heaven. As such, those who have died in the grace and in the presence of God, those sinners who were able to reunite with God (after penance) before or during their death may go straight to heaven or may have to undergo the so-called purification in Purgatory. And once they are cleansed completely, then they can enter God’s Kingdom.

Pope Francis reiterated the importance of praying for the faithful departed and the offering of the Eucharistic celebration, which is considered as “the best spiritual help we can give to their souls, especially those who are most abandoned.” The Holy Father also mentioned that commemorating the dead by visiting the cemetery or hearing Mass in lieu of it and offering prayers gives “hope” for the souls that death is not the final word. There is still a so-called final judgment (the second coming) where everyone will be tried and judged in God’s court either in happiness or condemnation. The Holy Father also asked God to “help us walk on the path of complete purification” and that no Christian “be lost in the eternal fire of Hell, where there is no more repentance.”

Purgatory grants hope for those who would like to reach heaven. That is where our prayers could matter eternally as it will truly help mitigate the pain and sufferings of the souls departed in Purgatory and fast track their entrance to Heaven eventually. And when they’re in Heaven, they could also pray for us, the living, out of gratitude. That’s the beauty and rationale behind the mystery of Purgatory. One day, they will help us by their powerful intercession, and, when our time on earth is finished and when we have accomplished our mission, the souls whom we’ve prayed and are now in Heaven may join in accompanying and welcoming us in Heaven. So, why don’t we make it a daily habit to say a prayer for the souls in Purgatory? May God bless us all. Amen.

Eternal rest grant unto the holy souls in purgatory, O Lord. And let perpetual light shine upon them. May they rest in peace. Amen

Jesus, King of Mercy, we trust in You.

Note: Also published in a Filipino Catholic magazine in the U.S.